Launch of Campaign for Responsible Rodenticide Use (CRRU) Ireland 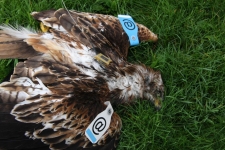 Nine red kites were found dead in the autumn and winter of 2011 after the releases in Fingal. Subsequently six of these were confirmed to contain brodifacoum, a second generation anti-coagulant rodenticide (SGAR). This unfortunately this included the death of the satellite tracked red kite Blue White @ (depicted in the photo) that had travelled more than 190km out west to Co. Mayo in her first weeks after release and was subsequently found dead near Lusk, Co. Dublin a few weeks after her return.

Red kites are particularly susceptible to accumulating rodenticides and eat large numbers of rats and they are specialist scavengers. In particular they may eat dead or dying rats and may therefore be exposed (accidently) to rodenticides in their prey.

The Golden Eagle Trust welcomes the launch of the Campaign for Responsible Rodenticide Use (CRRU) in Ireland and urges people to get involved, spread the information and think about the use of rodenticides and our native Irish wildlife.

At the Ploughing championship today the Irish Campaign for Responsible Rodenticide Use was launched by the Minister for Agriculture, Food and the Marine Simon Coveney.

Anticoagulant rodenticides used to kill rats and mice have been detected in many of our top predator wildlife species. Recent scientific research has shown that they now occur in over 80% of our barn owls who feed mainly on mice and rats. Other rodent-eating species such as kestrels, long eared owls, kites, buzzards as well as pine martens, stoats and foxes are all vulnerable too.

While pests such as mice and rats which can contaminate food and carry disease must be controlled, the rodenticide industry has recognised the need to protect and enhance wildlife. In order to ensure that rodenticides are used correctly and in ways that minimise the exposure of wildlife, the Campaign for Responsible Rodenticide Use (CRRU) has been initiated in Ireland. It has been set up under the chairmanship of Dr. Mark Lynch, former Senior Inspector in the Pesticides Control Service of the then Dept of Agriculture and Food. It is supported by all the main manufacturers of second generation anticoagulant rodenticides that are in use in Ireland.

Poor pest control practice has a negative effect on wildlife. CRRU Ireland will be raising awareness of how to use rodenticides in a responsible manner by having a planned approach, by using enough baiting points and by never leaving bait around at the end of treatment. Owls and birds of prey play a role in keeping down rodent numbers around farms and food manufacturing plants. It is vital to ensure that rodents that are dead or dying after ingesting rodenticides are disposed of correctly and are not available to wildlife higher up the food chain.

Launching the company Minister for Agriculture Simon Coveney said “I am very proud of the clean green image that our food products have, both here and overseas. It is equally important that we maintain this clean healthy reputation for our wildlife as well. While it is essential that rats be controlled it should be done in a manner that does not harm non-target species such as barn owls and kestrels”.

For more information about the Campaign for Responsible Rodenticide Use Ireland log on to www.thinkwildlife.org or call Eanna Ni Lamhna on 0876147506