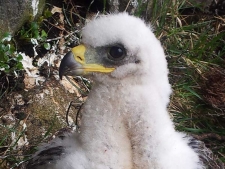 The small Golden Eagle population in Donegal is coping with the unseasonal wet and cold breeding season.  There are two active nests and several other sites occupied by pairs or single territorial birds.  One of the nests had two eggs, but only one egg hatched and the female chick is now almost five weeks old.  The adults have found it difficult to catch live prey during the recent spells of bad weather and large fires, in parts of the home range in May 2011, has meant that some of their territory is still devoid of food.  Late last week the first nest visit showed that the adults had brought in a badger cub, this is at least the fifth badger cub confirmed as prey for the Glenveagh Golden Eagle pair and it is suspected that several other badgers have gone unrecorded, as we only visit a nest 2-3 times annually during the 11-12 week period from hatching to fledging.

The nest ledge had very little nesting material on it, though it is reasonably well sheltered from the overhanging rock above the nest cup.  The adults have been seen hunting together over the Derryveagh Mountain tops late into the evening between 8-9pm and also in the early morning.  This is still the most productive pair in Donegal, they produced 1 chick in 2007, 2 chicks in 2009, 1 chick in 2010, 1 chick in 2011 and no chicks fledged in 2008 and last year, 2012.  Let us hope the weather picks up shortly and that the adults can catch enough live prey to bring back to the nest and feed the chick over the next seven weeks.

The second nest had two chicks and both chicks were observed in the nest on Friday 17th May and were approximately 3 weeks of age.  However the unusually wet and cold weather subsequently (especially Sat 18th and Sun 19th) probably led to a severe shortage of food being brought to the nest and by Wednesday 22nd May only one chick was observed during a long nest watch.  Usually only one Golden Eagle chick fledges from a nest each year.  Very often the older chick (which hatches out 3 days sooner than the second egg) can injure the younger chick.  But since the younger chick in this eyrie had survived for at least 3 weeks, it should have been able to avoid any sustained pecks from the older sibling and it is more likely that all available food was initially fed to the stronger and more demanding chick by the adult eagle.  The younger bird probably succumbed to a shortage of food as a result of repeated spells of poor weather, which would have curtailed the successful hunting of the adult birds.

In summary, the Golden Eagle project faces 3 primary constraints.  The shortage of donor stock from Scotland has been a limiting factor.  The poisoning or shooting  of Golden Eagles in Donegal, Northern Ireland and in north Connaught has also been a limiting factor and has been very difficult to confirm in remote mountains without  the use of Satellite tags.  And finally, the condition or quality of mountain habitats and associated mammals and bird species has been highlighted by detailed National Parks and Wildlife Service and Birdwatch Ireland surveys and reports.  However, if we can maintain a small breeding population, over time we may be able to minimise the impact of poisoning and enhance the condition of our mountains.  The Golden Eagle population would then be able to respond to those new opportunities.

It has been a very unusual spring and breeding season to date in the Donegal Mountains.  There has been very little growth in vegetation to date and Red Deer are still to be seen feeding in the valley bottom and adjacent fields.  Normally they would have moved to fresh grasses and browsing in the hill tops by now.  There have been very few signs of Moth caterpillars on the heather and Merlins must be finding it very hard to build up their body weight.  The shortage of insects, (especially spiders and Crane flies), has been quite obvious and the small upland passerines have been seen moving about in small groups rather than quickly establishing pairs and getting down to breeding.

On the positive side, there has been some important progress recently on the issue of poisoning enforcement and the statutory authorities are continuing to put in place a more rigorous monitoring and enforcement regime.  Over the coming months an even more robust system should be in place to deal with the illegal use of poison.  We have yet to raise sufficient awareness that the poisoning of foxes and crows was completely banned by EU Agricultural policies, which was enacted in Ireland in 2008.  Some of the media have been told that the wildlife lobby banned poisoning in the 2010, e.g. the Statutory Instrument (S. I. 481), whilst in fact this legislation actually allowed the use of poison, under strict licensing conditions, on non meat baits.  It just happens that there is not a single poison or veterinary medicine available in Ireland, which is registered and approved, for the control of Foxes and Crows since the 2008 Statutory Instrument, (S.I. 511) enacted in 2008.  Whilst poisoning remains the single biggest threat to Golden Eagles, White-tailed Sea Eagles and Red Kites, the use of poisons has decreased over the last decade and the continued spread of Buzzards is both; an expansion of the Irish population but also the result of a decreasing level of poisoning mortality.

At this early stage of the breeding season, it is worth noting that for the first time in over 200 years Ireland has at long last White-tailed Sea Eagle, Red Kite and Golden Eagle chicks developing in swaying tree tops and remote cliff ledges.  These nests were once an integral part of our annual breeding season and the continued support of the communities where they have settled is a real cause for optimism.  The strong rural tourism lobby is increasingly aware of the potential and benefits of wildlife for tourism, either through direct public visiting or its subtle use in promotional activities, and the agricultural sector is conscious of the importance of its ‘green image’ in marketing its Agri-Food exports.  The ongoing challenge for all wildlife NGOs is to try to harness and utilise a growing sense of the importance of wildlife for the two most important sectors of the rural economy, namely farming and tourism.  Hopefully in a couple of years time as the eagles and kites become more established across parts of the country, people will realise that the ‘Fear’ of these large birds of prey was largely based on quite exaggerated historical perceptions.  The Golden Eagle Trust restoration programmes have faced some real set-backs and presumably we will face further losses to poisoning in the future.  But at times we need to recognise the undoubted progress these projects are making and celebrate the very genuine community support they have evoked locally also.

Last modified on Monday, 27 May 2013 23:34
Published in Golden Eagle updates
More in this category: « Two Chicks Fledge in Glenveagh
back to top