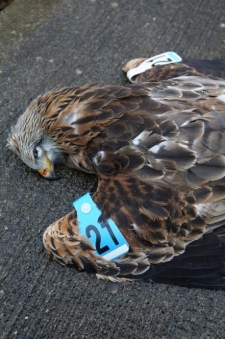 A member of the public recovered a dying red kite in Wicklow Town. The bird died a short time afterwards despite local vets trying to save the bird. It was found close to the golf club and close to a public footpath and road.

Subsequent post-mortems by the Department of Agriculture at Celbridge and toxicological tests by the State Laboratory have now confirmed the bird had been poisoned with not one, but two highly toxic banned pesticides!

This is the first case ever where both carbofuran and alphachloralose were detected in the carcass of the kite. It is suspected the bird had been feeding on carrion placed in the countryside and illegally laced with these chemicals.

The Department of Agriculture, Food and the Marine (DAFM), who register and approve all pesticides and poisons, banned all poisoning of animals and birds, apart from rodents and rabbits under Statutory Instrument 511 in October 2008. Poisoning any wildlife including crows, foxes and birds of prey is therefore a clear breach of the cross-compliance measures of the Single Farm Payment.

The red kite identified by its tags as “Blue White 21” which fledged near the village of Redcross in 2011 is confirmed to be the off-spring of “Blue Purple G” the adult female poisoned by alphachloralose 13 months earlier near Brittas Bay, Co. Wicklow.

So, irresponsible and illegal use of has proven to have killed two generations of the same kite family – totally devastating news to the project team.

Dr Marc Ruddock, of the Golden Eagle Trust said “The reintroduction of red kites has been a fantastic success story and the expansion of the population along the east coast has allowed an increasing number of people to see these amazing birds. Unfortunately, every year we get tragic incidents like this. Illegally placing poison in the countryside puts wildlife, domestic animals and potentially members of the public at risk. We urge anyone with information about this or other wildlife crime to contact the National Parks & Wildlife Service (NPWS) or An Garda Siochana and also report poisoning to their local Department of Agriculture office”.

Jimmy Deenihan TD Minister for Arts, Heritage & Gaeltacht, at the Department which funded the re-introduction of the kites in Ireland, appealed to anybody who may have more information about the deaths of these birds. “The pesticides used to poison these red kites were highly toxic. As soon as they were ingested these magnificent birds of prey – which are protected by law – would have had no chance of survival. I call on any person with any information about this to speak to the Gardaí or any regional office of my Department”.