Red kite "Damian" released back to the wild in Wicklow 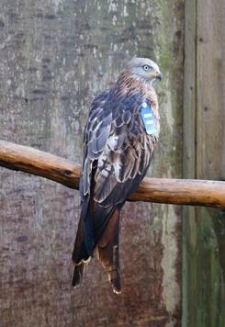 The Wicklow red kite project was boosted today after a two year old injured red kite "Blue Blue =" was nursed back to health by Gillian Hicks and the team at Cloverhill Veterinary Clinic, Glenealy, Co. Wicklow.

The bird was found last week by a member of the public, Robert McCoy who brought the bird to the vets for care and then the project team kept the bird for a few days in the aviaries, gave it plenty of food and released in back to the wild. Robert informed the project team "he just loved seeing the kites in the area and was glad the bird was back in the wild".

The team at Cloverhill affectionately named the kite "Damian", after the British Trust for Ornithology (BTO) ring around its leg, used to identify the bird, which ended in number "666"! This was a very appropriate name as previous red kite project manager, Damian Clarke, released the kite back in 2010.

The bird was raring to go and was met by another two other kites as it circled the fields it was released from near Redcross.

The kites are currently gathering into communal winter roost sites and at this time of year birds can be seen in groups of five or six. Up to 27 red kites have been recorded during the winter circling Avoca village.

The project is very grateful to Robert and the team at Cloverhill for their care of the kite and support for the project.