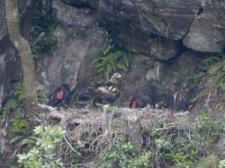 Two Golden Eagle Chicks that hatched in April have now fledged and left an eyrie in Glenveagh National Park, Co. Donegal. The youngest chick was removed from the nest at four days of age and fostered by captive Harris Hawks before being returned to the original nest and reared by its eagle parents, alongside the older chick. Both chicks are still in the vicinity of the nest and are likely to be mentored and provided with food by both adults until sometime in October. It was extremely likely that the weakest second chick would have died at an early stage, if the temporary intervention was not initiated.

Fortunately, this year's new eyrie was in a very sheltered position on a large ledge, tucked between two protruding rock faces and under a large overhanging rock. This is only the second successful breeding attempt by Golden Eagles, since the Golden Eagle reintroduction project started in 2001. In 2007, this same pair of adults reared a single chick in Glenveagh. The female was collected from Assyant, Sutherland in Scotland in 2001 and the male was collected from the Isle of Skye in 2002. The adult eagles were reintroduced into Glenveagh National Park as part of the Golden Eagle reintroduction programme, which commenced in Glenveagh National Park in 2001. The Golden Eagle Trust Ltd and the National Parks and Wildlife Service are managing the project. The project began with funding from the National Millennium Committee in 2000 and has been funded since by the Department of the Environment, Heritage and Local Government, EU LIFE Nature, the Heritage Council, Údarás na Gaeltachta, KPMG and others.

The fostering of the second golden eagle chick was a new and innovative departure for the Irish project. Though the procedure was successful it was more complicated than initially envisaged. The adult eagles quickly accepted the returning chick after 3 weeks of fostering by captive Harris Hawks, at Pedro Soltani's falconry centre in Glenties, County Donegal. The female was seen to tenderly preen the fostered chick for 40 minutes during its first day back in the nest. However, close observation revealed that the chick was unable to stand upright to snatch food proffered to it by the female. A sitting chick is a behavioural response indicative of a well fed chick. The female actually tried to gently nudge the chick several times to stand up and be fed. The chick was therefore removed again within 24 hours and brought to the Animal Hospital, in Castlebar for a veterinary check. It appears that despite the calcium supplements provided in the food given to the chick by the Harris Hawks, that the lack of small bone fragments in the initial diet of the chick had lead to a weakness in both legs. The chick responded very well to a further two weeks in captivity entailing daily medication. It was returned to the nest a second time, as soon as the course of medication was complete and once again the adult eagles quickly accepted the chick. The chick's mobility and positional response during feeding was now fully correct and the parents started and continued to feed both chicks over the remaining weeks in the nest.

Some food items were noted during the nest visits and a detailed search of the nest for prey remains will be carried out shortly. However early indications suggest, that the diet is quite similar to the 2007 diet, with Irish Hare being the main food item, followed by badger cubs (3 confirmed in 2009), fox cubs and grouse. As the chicks grew older, the adult birds only visited the nest with food once or twice a day.

The project team are delighted with the outcome of this year's breeding attempt and hope to be able to use similar techniques, with requisite adjustments, in the coming years in order to maximise the productivity of such a small national population. We would like to express our gratitude to the falconer Pedro Soltani and to the Vet Niall Curran, of the Animal Hospital for all their support and professionalism over recent months.

Elsewhere in Donegal, a second pair of Golden Eagles once again laid two eggs, which failed to hatch. This is the fourth time that eggs laid in this territory have failed to hatch. The eggs were proven to be infertile this year and we will do all we can to rectify this problem in 2010, if possible.

In total, 8 territories were noted in Donegal in 2009. 5 territories contained adult or sub-adult pairs and three territories held single birds. One newly established pair of Golden Eagles has occupied a territory including the mountainside where a poisoned Golden Eagle was found in February 2009. The bird was poisoned with Paraquat. The Golden Eagle Trust would ask all landowners, in the vicinity of the poisoned eagle and the newly established pair not to leave out poisoned meat this winter/spring. Apart from the established pair within the confines of the National Park, we do not normally divulge the location of territories in Donegal for security reasons. However, in this instance we would like to publicly inform landowners within the above territory, within a boundary from Dunlewey, to Crolly, Loughanure, Dungloe, Doocharry, Lough Barra and Slieve Snacht to be aware that there is a new pair established here and please, please consider alternative methods of controlling foxes and crows. If one uses poison legally you are obliged to erect poisoning notices, inform the Gardai in writing, not use banned substances and not use dead livestock as poisoned meat bait. We would ask anyone who finds dead animals in suspicious circumstances or any form of meat bait on the hillside in this territory, not to touch the items, but take good notes or grid references of its location and inform the Golden Eagle Project team or the local Gardai immediately. A satellite tag has been attached to one of the Glenveagh Golden Eagle chicks, which will enable us to follows the chick constantly throughout the Northwest over the coming years. We hope it may even act as a slight deterrent to anyone considering using poison illegally rather than using legal control methods.

As a direct result of the poisoning in February, Scottish Natural Heritage (SNH) called an immediate review of the Irish project and the licences they approve for the collection of donor stock. There had been strong public criticism in some Scottish media of the wildlife legislation and the attitude toward eagles by the farming and shooting community in Ireland by the Scottish Gamekeepers Association. SNH carried out a thorough and independent review of all aspects of the project. The National Parks and Wildlife Service and the Golden Eagle Trust were involved in the process and were able to reassure SNH of the widespread support for the project, despite the ongoing threat of poisoning. SNH issued their findings in late June, which was broadly supportive of the project whilst also identifying some timely recommendations. Unfortunately the necessary timeframe for the report and issuing of this year's licence did not allow time for chicks to be safely collected from eyries in the last days of June.

Project manager, Lorcá¡n O Toole, from the Golden Eagle Trust Ltd, said, "It was really encouraging to see an Irish Golden Eagle eyrie with two healthy chicks. We know from local family stories that Glenveagh usually had an eyrie with two chicks over a hundred years ago. It has been a difficult year after picking up a poisoned dead Eagle in February and as a direct result, the disappointment of not being able to collect Scottish chicks this year. But to have two chicks fledge renews our belief that we can see Eagles take root in Ireland again. The involvement and support of nearly all the hill farmers in the Derryveagh Mountains and the Donegal IFA have been significant ingredients of the project's success to date. It is important that we recognise and encourage the vital role and responsibility farmers have in sustaining Ireland's landscape and wildlife".

Pat Vaughan, District Conservation Officer, National Parks and Wildlife Service, said, "It is great to have Golden Eagles breeding in the wild in Glenveagh National Park once more. This year's success is a credit to all those involved, including the volunteers and NPWS staff who monitored and guarded the nest over the long breeding season. We are also grateful to all the farmers and landowners within this Golden Eagle territory, adjacent to the National Park, for their continued support."


Notes
The Golden Eagle Reintroduction Project has released 53 Birds in Donegal from 2001 to 2008. Young chicks were collected from nests in Scotland and reared in avian cages, without human contact, for a further 5-7 weeks before being released.

The released birds have been seen or followed using satellite or radio transmitters and have wandered widely. Birds from Glenveagh have been noted in upland areas throughout most of Ulster and all coastal counties from County Down to County Kerry. There has been one confirmed sighting of a Golden Eagle, released in Donegal, in the Cairngorm Mountains, Scotland.

To date, Golden Eagles are the only Irish predator known to kill badger cubs, fox cubs, Ravens and Hooded Crows. Hill farmers have noticed in some areas that the presence of eagles has caused the local Hooded Crow and Foxes to move their nests or dens and thereby actually improve the survival rate of nearby newborn lambs.

Golden Eagles can live up to 30 years. They normally take 4-6 years to breed and can produce young for up to 20 years. Golden Eagle eggs are incubated for 6 weeks (42 days) and the chicks can take up to 12 weeks (84 days) to fledge.

The Golden Eagle donor stock was collected from Scotland under a special licence from Scottish Natural Heritage. Only one chick can be collected from nests containing two young. Every year scores of bird of prey enthusiasts help monitor potential donor stock nests. The Scottish Raptor Study Group, the Highland Foundation for Wildlife, the Forestry Commission, the National Trust for Scotland, and the Royal Society for the Protection of birds have all played a key role in collecting young. The Irish Golden Eagle Reintroduction Steering Group would also like to thank all the Scottish landowners, deerstalkers and gamekeepers who have supported the project to date.