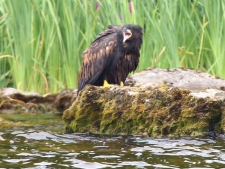 Two White-tailed Eagles have successfully fledged in Ireland for the first time in over 110 years. In the last week the two birds were seen away from the nest and yesterday both chicks were seen flying near the nest on Lough Derg, near Mountshannon, Co Clare. This pair also created history in 2012 when they nested for the first time.   It is another significant milestone in the long arduous effort of restoring these magnificent birds to Ireland’s wetlands and coastline.

These are the first Irish born chicks of the high profile reintroduction programme, which began in 2007 with the release of young Norwegian eagles in Killarney National Park.  The White-tailed Eagle reintroduction programme is managed by the Golden Eagle Trust in partnership with, and funded by, the National Parks and Wildlife Service of the Department of Arts, Heritage and the Gaeltacht.

Over the coming years, we expect more of the 10 territorial pairs of White-tailed Eagles monitored and located this spring, between Cork and Galway, to nest, lay eggs and hopefully rear young.  Other maturing birds, released in recent years are also likely to augment the breeding population over time.  It is hoped that in time these Irish bred chicks, from Lough Derg, will survive and breed themselves in 2017 or thereafter.

All White-tailed Eagle and Golden Eagle breeding attempts are prone to natural failures, over the long 4-5 month breeding season and can encounter a range of constraints and obstacles.  Young pairs of breeding eagles are prone to failure before they gradually gain the wide array of skills required for successful breeding.  These skills include nest building, continuous uninterrupted incubation, maintaining female body condition and continuously provisioning chicks with regular live prey.

This year 3 White-tailed Eagle pairs attempted to breed and laid eggs in Counties Kerry and Clare.  One pair failed toward the end of the 6 week incubation period.  This pair is still on site and hopefully in a mere 6 month’s time they will begin to breed again next spring.  Another pair that nested in Killarney National Park hatched at least one chick which survived to within 3-4 weeks of fledging.  But it was very disappointing to find that the new nest had collapsed causing the death of the chick, shortly before it was due to fledge.  It seems likely that the nest material (vegetation, sods and dead branches) dried out and shrank significantly in the recent dry spell of weather.

The Mountshannon nesting pair also faced its own problems before the two strong chicks took to the skies.  As part of the plan to enhance the security around the well known nest site and increase public awareness of eagles a camera was installed near the nest and several branches were removed.  This allowed for the continuous guarding and monitoring of the nest from a safe distance on the Lough shore.  These changes apparently triggered a negative response from the adults and the adults only flew near to the nest subsequently, without landing on the nest.  The well grown chicks were provisioned with food on the nest and subsequently fledged in great condition and at the anticipated date.

The two chicks are expected to stay around the islands and western shoreline of Lough Derg, north and south of Mountshannon, for the coming weeks with their parents.  Sometime in the autumn these juveniles will leave their parents’ territory and begin a 3-4 year nomadic life before settling in their own separate territories before attempting to breed themselves.

The eggs were laid in County Clare in late March. The Mountshannon breeding adults, a five year old male and four year old female, were both collected on the island of Frøya, off the west coast of Norway. This pair laid eggs in 2012 but failed to hatch chicks. However by January 2013 they had already built a new nest. 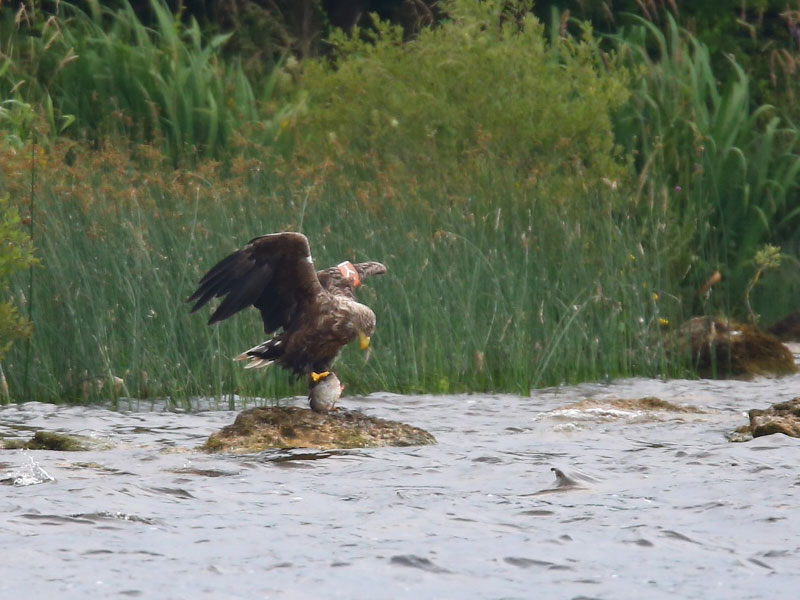 The Minister for Arts, Heritage and the Gaeltacht, Jimmy Deenihan, T.D., said, “I am truly delighted with this news, marking a great step forward in this ambitious project. It is a joy to see these magnificent birds of prey being reintroduced in Ireland. Congratulations to all involved in Killarney and Clare. My wish now is that these young eagles will have a long life in our skies.”

“This day has been six years in the making but to witness the first flight of a wild Irish-bred White-tailed Eagle here in Mountshannon was a fabulous moment”, said Dr. Allan Mee, project manager for the Golden Eagle Trust. “These two young eagles represent the first of what we hope are many more Irish bred White-tailed Eagles to fledge from nests over the next few years and themselves form the basis for a viable self-sustaining Irish population. The signs are good that we can achieve this with 10 or more pairs likely to breed annually over the next few years. While there is still a lot of hard work to be done to achieve this goal we shouldsavourthis day as a really important milestone in the recovery of this iconic species.  And what better place for White-tailed Eagles to make their comeback than Lough Derg with an abundant supply of potential nest sites and fish for food and set amongst some of Ireland’s most wonderful scenery! This is the second year this pair has nested here and provided a unique opportunity for both local people and visitors to watch nesting eagles. It is likely that this pair will nest here for many more years to come and not only contribute to the recovery of the species but to the growing awareness needed to safeguard our natural heritage.  We look forward to many more years of chicks flying from nests in East Clare.  Along with the help and close cooperation of local communities, such as at Mountshannon, we can help safeguard their future.” 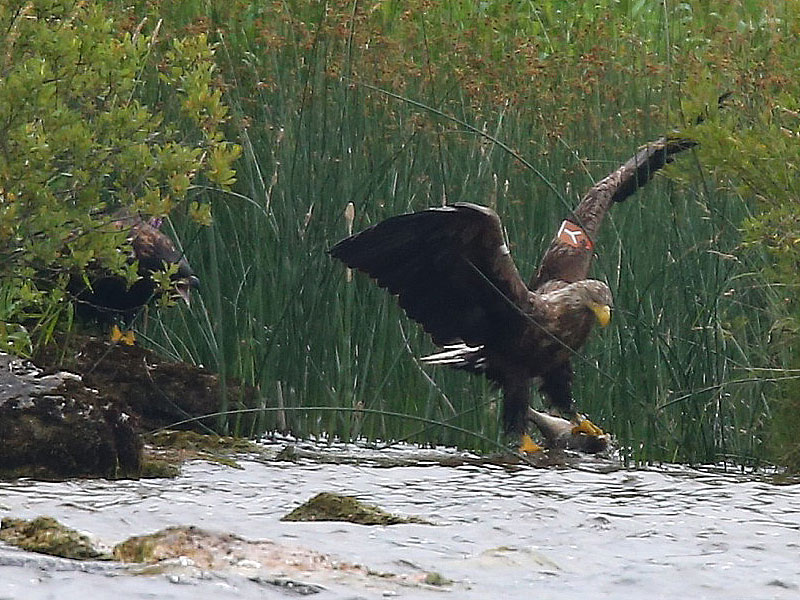 John Harvey, Chairman of Mountshannon Community Council, expressed the delight felt locally at the news of the first White-tailed Eagles to fledge in Ireland in over 110 years. “The pair of White-tailed Eagles took up residence here two years ago and has been an unexpected but very welcome addition to the heritage of East Clare. Ever since they began nesting this year in February local people have taken a keen interest and helped monitor the progress of the pair. Last year the pair failed to hatch chicks so we were really hopeful things would work out this year and we would see chicks leave the nest. We hope that the association between Mountshannon and the eagles will continue for many years to come!”

Despite all the problems and setbacks Irish White-tailed Eagles have endured since they were first released in 2007, they continue to make important incremental steps each year, as part of the long term restoration project.  The challenges facing fishing or hunting birds can be periodically difficult as can the challenges facing breeding birds.  But as the small Irish White-tailed Eagle breeding population grows, we can hopefully see these breeding birds gain experience and slowly expand their limited range. 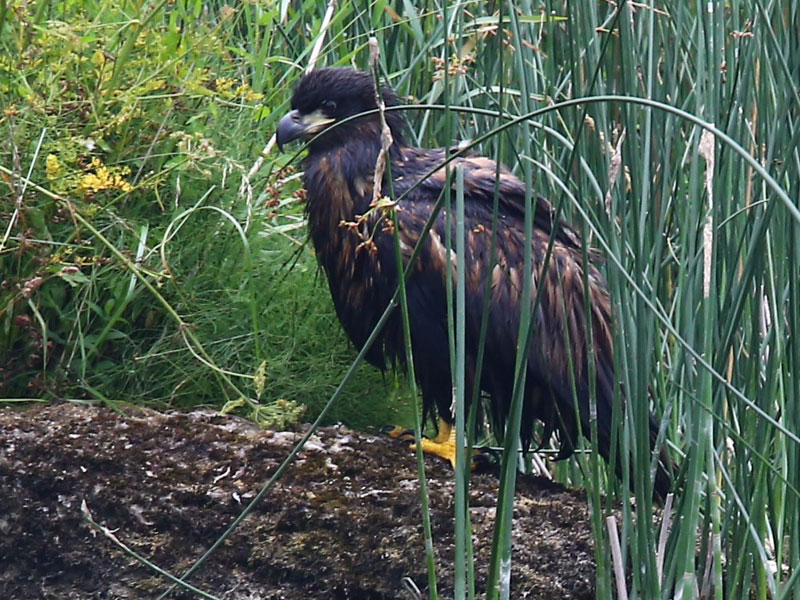 The Golden Eagle Trust would like to publically acknowledge the support of scores of individuals, volunteers, landowners, walkers and boating enthusiasts for their support and protection of territorial eagles from Galway to Cork, but especially in Mountshannon, Co. Clare and in Kerry.  Despite a few incursions onto the nesting island by outside visitors, the local boating and fishing community in and around Mountshannon have been totally supportive and co-operative, which has been central to the successful fledging of these birds.  We hope more people can visit Mountshannon and hopefully enjoy the unique spectacle of a family group of eagles wheeling above the beautiful scenery of Lough Derg.

Last modified on Thursday, 25 July 2013 22:27
Published in GET General updates
More in this category: « White-Tailed Eagle chicks hatch for first time 110 years Report on the investigation of possible Crane habitats in Ireland »
back to top